Have you ever wondered if your life matters?  Or asked the question, “Can I really make a difference?”  Maybe you are a stay at home mom and you are just trying to catch your breath from the endless piles of laundry needing to be tended to or the gazillion toys that need to be picked up, just to be right back on the floor again in two seconds.  As you sit on the closed toilet seat trying to escape that tiny human with their fingers swishing under the door, you ask yourself, “What can I do?”  Maybe you are at the other end of the spectrum.  Maybe you are a retired empty nester with loads of time on your hands.  You went from a house full of kids and forty hour work weeks just trying to fit everything in, to a spotless house and the Hallmark channel playing in the background.  As you sit in your comfy chair sipping your third cup of coffee, you ask, “Now what?” Or maybe you are recently married and married life isn’t what you thought it would be, it’s much harder.  As you grab your keys and coffee mug you rush out the door you give your husband a quick kiss as you head to work.  You open your car door and sit a minute before starting the car, you let out a deep sigh and ask, “Where do I go from here?”

Your life may seem ordinary and you doubt that God would ever use a women like yourself.  You believe the lie that you are insignificant and you are destine to just survive this life and let other women do the amazing works of God.  These women may look like they have it all together, or they may have a published book, they may have a nanny or an endless supply of fund to support this amazing dream.  These women may come off as extraordinary and self equipped to accomplish the task God has sealed upon their life.  Let me tell you ladies, those qualities are not what God needs to move mountains.  Let me briefly introduce you to five ordinary women that used to make extraordinary things happen.  I could write for days on these women but since we all have places to be I am going to paraphrase a lot of there story.  I may expound on their stories later in another blog post but for now lets just take a quick look into their lives.

You have heard their stories before but lets look into the lives of Sarah, Rahab, Ruth, Ester and lastly but most importantly Mary.  Sarah was the wife to Abraham.  She was old and she was barren, unable to give her husband the heir he so greatly desired.  As they prayed God spoke to Abraham and promised him a child.  Sarah had little faith at this moment because she was past her years to have a child of her own.  She decided to take matters into her own hands and have her husband marry her maidservant, Hagar.  Hagar became pregnant but not with the child God had promised Abraham.   Once again God spoke to Abraham.  He told him that He will bless Sarah with a child of her own.  So the day came with Sarah became pregnant with Isaac at an old age of ninety.  The Lord said to Abraham, “I will bless her, and moreover, I will give you a son by her.  I will bless her, and she shall become nations; kings of peoples shall come from her.” I could go on and on about Sarah but I will save that for another day, but what I want you to take from Sarah is that she was old and her days were numbered, she made mistakes and had little faith at times but God still used her and blessed her through her son Isaac.  (Gen. 15-18)

Next we look into the life of Rahab.  This women has faith that can move mountains and it did.  I love her story.  Rehab lived in Jericho, a corrupt town surrounded by walls, and she was a prostitute in that town.  One night by a divine appointment two spies were sent by Joshua to her house to take refuge.  She welcomed them into her home and hid them on the roof when the King of Jericho went looking for the spies.  She offered her house and in return they gave her the greatest gift, the love and grace of God.  Through Rahab, the Isaelites were able to take over the town of Jericho and enter the promise land.  Rahab later became the wife of Salmon, one of the spies, and she had a son and his name was Boaz. God chose a woman who’s sin was on her sleeve for everyone to see and used her for something greater.  As a result grace and love poured out for all to see and washed the sleeve as white as snow. (Joshua 2) 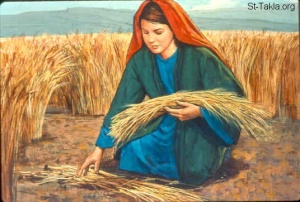 That leads us right into Ruth.  Ruth was a woman who suffered great loss, she lost her husband, father-in-law, and brother-in-law and yet her faith remained.  Upon their death she decided to follow her mother-in-law, Naomi, to her homeland.  Ruth spent her days caring for Naomi and did so by gleaning in the fields.  This is where she would pick up the left over wheat stalks that the workers left.  The field was owned by Boaz, a relative of Naomi, and he took notice of her and later married Ruth.  By marrying Boaz, Ruth saved Naomi’s family name and gave her a grandson, Obed.  God used the brokenness and hurt of a widowed women and brought out love and second chances.  (Ruth 1-4) 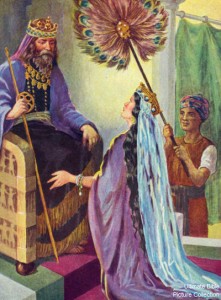 Another women I want you to meet is Ester.  Ester was an orphan raised by her uncle.  She was hand picked by the King to be his wife.  It was through her persuasion that the King decided not to persecute the jews and they were saved.  God picked her, an orphan, to save His people and she became a queen and a great leader.  (Ester)

Lastly, Mary was chosen to carry the Son of God.  You all know this story, it is engraved on our hearts.  Mary was chosen by God not because of the things she did or because she was perfect, but she was perfect for the job because God chose her.  She had the faith to see it through and great things happened.

Now, like I said these are a very brief description of their stories but what I want you to take from this is that all these women were normal, ordinary women who were chosen by God to do great things.  Four of these women were even part of Jesus’s lineage.  God doesn’t use saints, he make the normal ordinary woman a saint and they become a part of God’s amazing history. If you think your life is insignificant just look at these women, the only difference between them and you is they said yes.  Say yes to God and he will take you to places you never thought was possible.  Be encouraged.  You are strong, capable & most definitely desired.  Don’t worry about not being equipped because God will equip you!